Festivals have become kind of a big deal lately, with all kinds of new themes and experiences popping up all over the place.  But to my mind, food festivals are firmly at the top of the must-do list.

There have already been several in South Wales catching my eye over the summer, including Cardiff International Food & Drink Festival back in July and the Street Food Circus at Sophia Gardens running through August & September (individual post to follow), yet Abergavenny Food Festival is the one I had heard so much about and had been buzzing to go have a gander.

Coming off the train, I had expected stewards in brightly-coloured t-shirts or high-vis vests to be leading the way; but instead, those of us arriving at Abergavenny train station had to follow the crowd and hope for the best.  This wasn’t exactly ideal; but after ten or so minutes, the bunting came clearly into view.  Immediately upon entering the main high street there was a soft buzz of excitement with people everywhere popping in and out of shops with smiles on their faces and goodies in their hands.  It was the kind of busy where everyone’s friendly, laid-back and there for a good time – as oppose to the sometimes stressful impatience of places like London – which lent a lovely welcoming community-feel to the event (and in my personal opinion, a very Welsh feel).

First stop was The Castle; or rather, queueing for The Castle which had at this point reached full capacity.  Of course my first thought was one of slight panic thinking of the uncomfortable closeness that ‘full capacity’ crowds tend to be, however, once inside I was relieved to discover that this was not the case at all.  Rather than overwhelming and congested it was cosy and intimate in what felt like a very special way, perhaps because of the natural romance of the historic castle setting itself and the gentle rays of sun that beamed down upon us (if only for about ten minutes…).  To my left was the well-renowned Cyrus Todiwala speaking at the Rude Health tent about the importance of buying local produce and supporting local businesses.  This is something, I, myself believe to be of great importance, especially as a geography graduate with a strong interest in encouraging sustainability.  The fact that this more localised and sustainable culture is becoming so widely embraced and encouraged restores my faith in humanity a little and certainly put a smile on my face if there wasn’t already.  I mean, all you have to do is walk around a food festival such as this to see that most of what’s on offer has been made right here in Wales and you’re instantly filled with a sense of pride and achievement.  It becomes clear that we can and do produce all we really need within our beautiful little country and I love to see that the awesome and impressive nature of this is being admired and appreciated by all.

My only real criticism of the experience would be that I was disappointed not to see as many local breweries and craft beers as I expected or would’ve liked, although this may have just meant that I didn’t get around enough to take full note of the beverages on offer.  I did spot Tiny Rebel along the way, a brewery based in Newport (S Wales, of course!) with its own pub in Cardiff called Urban Taphouse as many of you may know.  Cwtch and One Inch Punch are mine and my father’s current favourites: a Welsh red ale which holds the title of Champion Beer of Britain 2015 and a Tiny IPA, both packed full of the iconic flavour and character this proud little brewing company are all about.  I’d also personally recommend Cali as a fan of American Pale Ales but the choice is up to you, I still have several more to try but well recommend a visit to Urban Taphouse if you’re a big into your funky local beers.

As a side note, if like me you love a well-done craft beer then Pipes in Pontcanna is the place to be; their Bar Open events tend to be on the first Saturday of every month, totally transforming its tiny little back lane courtyard into a buzzing bunting-laden social hub.  It’s an ideal place to spend your Saturday afternoon – but I digress.

Back to Abergavenny: my next stop was the food tent area just off the main high street which brought to life so many wild and wonderful smells.  It was like its own little paradise for a foodie like me, something different everywhere you looked.  What instantly caught my eye was Science Cream, a Cardiff-based company which not only creates its own ice creams fresh to order with natural ingredients, but freezes them in seconds right in-front of your eyes using liquid nitrogen.  This is truly a wonder to behold and was famously described as ‘an ice cream you must try before you die’ by Buzzfeed in 2015.  From ice cream sandwiches to banana splits, to thick shake sundaes and even butter fried pancakes you’re certainly spoilt for choice here.  Flavours range from the tantalising caramelised peanut butter and double shot chocolate to the exotic cherry coconut and rhubarb ripple, of course with a multitude of toppings to add on as well, if you want to go all out – and I mean why not, when in Rome, right?  Everyone needs a cheat day! 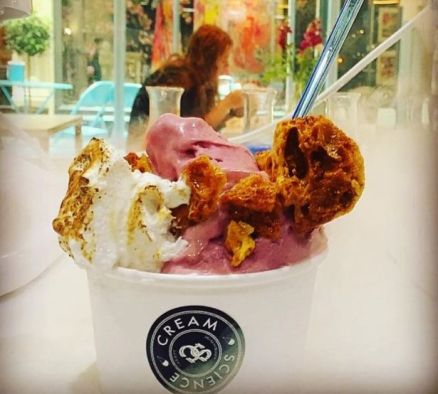 An example of Science Cream’s concoctions – this wasn’t mine but I wish it was! [photo credit: Buzzfeed]

I resisted the urge to dive straight in with the sweet stuff on this occasion, however, and opted for a savoury treat as my first taster of the day: a Butternut Squash, Mixed Bean & Cheese pie from the award-winning Tom’s Pies; which, as Bruce Almighty would say, was B-E-A-utiful.  Hot butternut squash and beans for me is definitely one of the ultimate healthy comfort foods; so hearty and rich, yet still nutritious and filling.  The perfectly thin, crumbly pastry (which okay, obviously isn’t exactly healthy or nourishing but cheat day is a wonderful thing) made it all the more comforting and I thoroughly enjoyed every guilty mouthful!  I was also amazed and impressed to learn that Tom’s Pies have a “long standing relationship” with Hugh Fearnley-Whittingstall’s River Cottage, according to their website.  Hugh is another chef I greatly admire for his work in sustainable farming and food practices, as well as his ongoing War on Waste campaign.  For this, I will forgive them for not being Welsh locals, as I had first assumed, later discovering that they are in fact a Devon-based company who have the absolute pleasure of being invited to all these fantastic food festivals and taste awards – twelve so far this year judging from their website! Living the dream if you ask me!

I ate my pie too fast to take its picture, but the box was pretty so…

There was still much more to see, so off I went to explore the streets of Abergavenny itself where further food and craft stalls were dotted around all over the place, all teeming with more eager festival-goers.  Turning onto Nevill Street was a feast for the eyes, bright colours and fresh flavours everywhere from the mouth-watering stuffed olives of The Olive Press to the fiery-looking chillies and sauces of Fearless Flavour.

An impressive spread from The Olive Press

Taste the rainbow, as they say… looking good Fearless Flavour!

Past these, however, came what we’ve all been waiting for: the bakeries.  A quick taster from Isabel’s Bakehouse clearly demonstrated why they had a very successful weekend – they sold out both days!  But Chock Shop was where I couldn’t resist temptation and treated myself to a Banoffee Brownie… wow that was good.  A little sweeter than I would normally have liked, if I’m honest, but perhaps this was because I saved most of it until the next day when I was (of course) wallowing on the sofa in hungover self-pity.  I, also, have a weakness for meringues which worked well to the advantage of Flower & White Ltd… I know, I was naughty.  But surely you kind of have to be at food festivals, else you’ll only look at all the good food and not actually enjoy any of it!  And besides, their Lemon Meringue was a seriously guilty pleasure in the best way.  I regret nothing.

This brings me to the end of my weekend adventures, as far as the food festival is concerned anyway.  The wide ranging variety of products and produce on offer, in addition to the guest speakers, live music and interactive sessions, meant that there was something fun for everyone at Abergavenny Food Festival.  The beauty and charm of the town itself also makes it a lovely place to visit any other time of year for a day’s mooching around the shops and cafés.  I can confidently say it was well worth a visit.  I had a great time!  And I will definitely be returning next year.