A few weeks ago I broke my Bottomless Brunch virginity at The Hilton, Cardiff and it was such a good deal I felt it worth shouting about. We went for a work friend’s birthday (because who doesn’t love bottomless prosecco?!) and we were pleasantly impressed by how attentive all the servers were, not once did our prosecco actually get to the bottom of the glass before being refilled – ideal! From when all guests sit down you have 90 mins to take full advantage of the free refills to the best of your ability and we were determined to do just that. (So much so that it became an afternoon of day-drinking in the sunshine afterwards but what can I say, make the most of our youth!)

There isn’t just prosecco at this Bottomless Brunch, Grey the Hilton’s restaurant also offer two courses within the deal, some savoury and some sweets. You can even pick two of the same if you wanted to, we’re not here to judge. My first choice was the crushed avocado & chilli on

rye toast with a poached free-range egg. The rye toast was thick and delicious and not too overpowering or heavy, whilst the avocado and egg were perfectly balanced in flavour and, as always, really complimented each other. This is already one of my favourite weekend breakfast/brunches and this was no different, I’d definitely have it again. It was a fairly small portion, more so than if you were ordering in one of Cardiff’s many brilliant breakfast spots (Juno Lounge, The Pot Bistro, Society Standard just to name a few) however this was part of a two course brunch so room was needed for more… 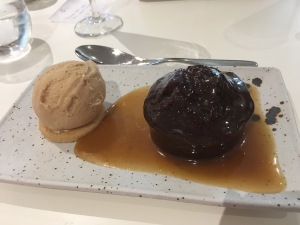 gooey chocolate brownie or as-much-ice-cream-as-you-can-eat kind of girl, but this dessert restored my faith and really hit the spot. It was delicious! There was the perfect amount of toffee sauce in my opinion (it was smothered in it) and the pudding wasn’t too hot, just the right temperature that it went perfectly with the ice cream. My only slight critique with this dish was that the actual plate it was served on didn’t quite lend itself to scooping up every last bit of ice cream/sauce, perhaps something with steeper edges might’ve been more appropriate.

All in all, we all had a great time and enjoyed our meals – even more so the prosecco! We worked out that we must’ve had somewhere between 5-6 glasses each in the 90 mins, (it was hard to tell as they were topped up before being fully emptied) which equates to just over a bottle each. The bill was £30 each for the two courses and the ‘bottomless’ prosecco, which we found very reasonable. This was perfect for a girls’ outing, the restaurant was full of hen do’s, birthdays and groups of women celebrating various occasions, and I will surely be doing it again the next time I find good enough reason to! (Although, do we really need any excuse?)

Have you tried this bottomless brunch? Or have you any others you’d recommend? Let me know!