Welcome to my new series, Home Made Sustainable! I warned you this was coming and finally I’m getting things written down which have been in my head for months! I’m super excited about it because my hope is that some small portion of my experience may be useful to somebody, even if only slightly, but also I’m determined to be realistic and openly discuss the fine line we all tend to tread between being super sustainable and conscious consumers and being human.

Last December my other half and I were fortunate enough to have completed on our first house; a project house. We were really excited to get our creative juices flowing and put our own stamp on everything, but there was a big project ahead of us and it went off to a really bad start with a serious mouse infestation, rotten floorboards, litter everywhere and general disrepair.

It may seem strange to start with the bedrooms in a new house, however for us this was the most logical way of doing things as they needed the least work (and enabled us to stay there from time to time). When I say the least work, I still mean full wipe-down and redecoration as well as new, non-mouse-pee-stained carpets.

Yes, this is our bedroom the day we got the keys. I wasn’t exaggerating.

The mice were actually the first challenge in doing things earth-friendly: how could we get rid of them without fumigating or mouse traps and killing them all off rather painfully and dramatically? Turns out it took time and patience but eventually they moved on thanks to a plug-in frequency emitter thing my OH found on the internet. Apparently it can take up to a month or so because they won’t leave if they have young; the builders did have an uninvited guest to their lunchtime doughnuts one time and we were beginning to worry we’d have to take some more drastic measures, but thankfully the mixture of frequency, loud banging & drilling and lack of food seemed to steer them away – phew. We now also have two mischievous cats which naturally helps.

When it comes to making eco-friendly choices in renovation there are a multitude of alternative products available on the market: special brands of paint (e.g. Earthborn), wool carpets, reclaimed wood floorboards etc. However the unfortunate problem is the often comparable cost increase. Now, the cost of environmentally sustainable products is a whole other debate and generally speaking I am a firm believer in paying that price, the ‘true cost’, but the thing is that it’s not always doable. Sure, I’ll pay £7 for a natural deodorant compared to a £1 aerosol of animal-tested Sure (although I’m finding a love-hate relationship with natural deodrants as someone who needs antiperspirant), but carpets and paints etc. are a whole other ball game – they’re not cheap to begin with and, like most first time buyers, we had a limited budget. This is one of the reasons I want to write this series; to encourage people to do what they can when they can’t do everything and not to feel guilty about it (which I have to constantly remember). To paraphrase the popular saying ‘We don’t need a handful of people doing sustainable perfectly, but more people doing it imperfectly’. 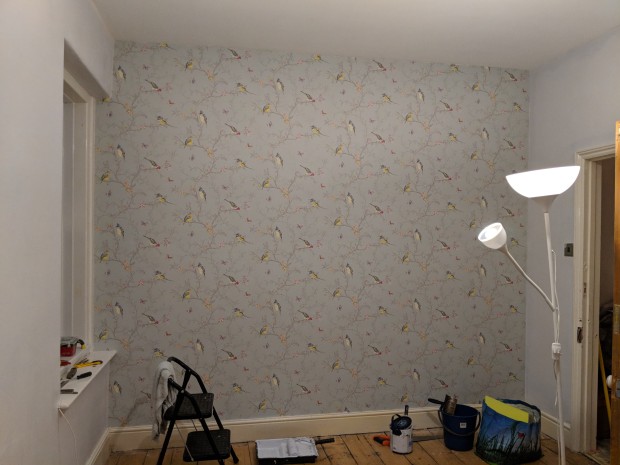 So, here is where I started. We sanded down the floorboards that were underneath the manky old carpet and kept them exposed just in this one room, knowing that it would be a hell of a lot of work to keep them exposed everywhere else. The fact that I stained and varnished them myself gives me joy every single day and really leans into the natural, woody tones we like to go for. The furniture is a mixture of new and second-hand but mostly the latter: 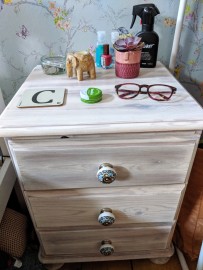 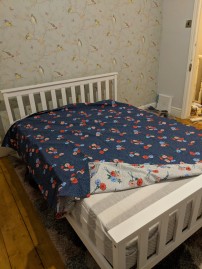 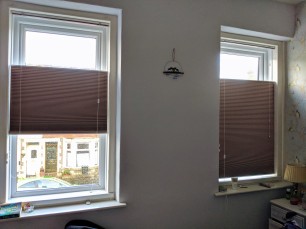 I looked high and low for a second-hand bed in the style I was after but was having trouble finding the right thing. I then looked for FSC certified wooden bed frames but again, budget came calling so we ended up with an eBay bargain we assembled ourselves. Similar with the rug, we kept looking on FB marketplace but wanted something to pick up the accents in the feature wallpaper (which is Leekes, by the way if you’re interested) and nothing was hitting the spot. Boxing Day bargains saw us the bedroom rug and our main sofa (which we had to remove a window to get in). There were pangs of guilt for this but obviously these are not items we intend to replace for a long time and will do our best to sell-on once we do, so I think it’s important to be realistic. The other thing on the new list is a shower curtain pole, which sounds odd but was a touch of Pinterest-inspired genius to allow for extra wardrobe room in the smaller of the two alcoves. The made-to-measure blinds were chosen because of the way our windows open, so their ability to position any which way is super helpful and means we can maintain privacy whilst letting light in. The honeycomb shape also allows for better heat insulation apparently – they’re from blinds2go if you were interested.

I feel it important to mention our choice of new mattress for a second, because there seem to be an abundance of options available at the moment all with very similar selling points (e.g. Eve, Simba, Emma, Leesa…). I did some thorough research, read lots of reviews and formed a spreadsheet to figure it all out. In the end, we chose the Leesa mattress [not in any way sponsored] because not only to they plant a tree for each mattress they sell, but they also donate 1 in every 10 sold to charities. Isn’t that fantastic?! And yet it’s not featured much on their current advertising which baffles me completely! But this is an area I feel proud to be doing more ethically despite it being a new purchase.

The chest of drawers is the perfect example of the woody tones we love and came from OH’s grandparents’ farm – it’s about 80-90 years old! Huge, deep drawers too which I’ve relined with leftover wallpaper from the feature wall. The bedside tables were a Facebook marketplace bargain with funky knobs added by yours truly (TK Maxx purchase), as was the mirror. The makeshift wardrobe I can’t really stand (hence why it’s not pictured! It had a hideous cheap plastic covering) but it had been hanging around my parents’ house unused for years, so for now it does the job, along with the drawers & pole. I keep wishfully looking at second-hand wardrobes on marketplace but transport is a problem – alternatively there are several charity furniture shops in Cardiff but bearing in mind the problems we had manoeuvring the sofa in, and the sharp twist at the top of the already narrow stairs, I’m concerned about getting something in in one piece. It also seems a real shame to waste any space in the large alcove so I’m currently in the process of installing scaffold board shelving and heavy duty curtain poles to form open wardrobes – keep an eye on Instagram for updates.

As for the paint, varnish and wallpaper, all of it was bought new and was a mixture of Dulux/Ronseal/Wickes own brand/standard white emulsion. I looked on Facebook and there are some good second hand decorating materials on there, but this was an all-hands-on-deck type of project and we were stressed enough as it was without needing to add guilt on top. Of course now we have a load of rollers etc. that we need to store somewhere, but that’s the way it goes! 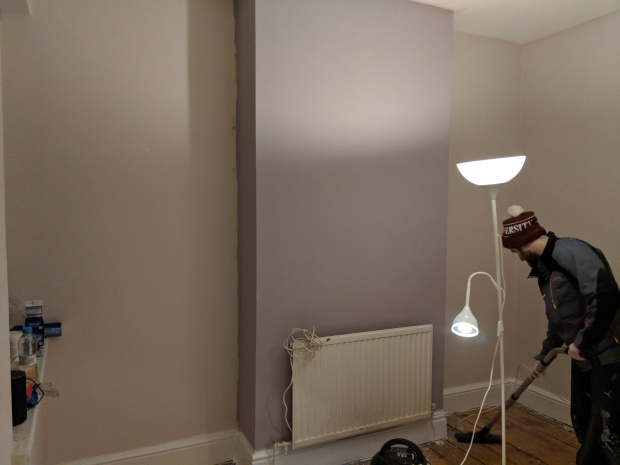 This is oldest photo I can find of the spare bedroom, but this was just after us painting it.

The other two bedrooms we carpeted with a kind of natural neutral colour my grandmother-in-law had from Pye Auctions (grandparents are pro at spotting a good deal or donating great pieces!) and furnished again with mostly second hand furniture. The spare bedroom we originally painted pink & purple as you can see above, but I regret the purple now and am planning to slowly change the decor to deep greens for a more botanical feel. I’ve started this off already with a curtain I deployed my mother to make for me, though we’ll likely install a blind as well as this is the sunniest room in the house. I really need a better photo of the dressing table to do it justice; I’ll try post one on Instagram soon. 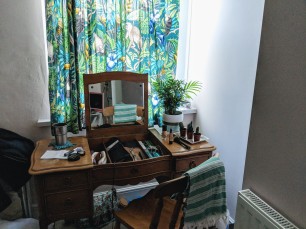 The third bedroom is our designated office and has been entirely second hand decorated bar a new filing cabinet (not pictured), including this fantastic rug from my parents we had in our living room back in the ’90s. I love it! The desk isn’t as sturdy or deep as I’d ideally like, so this will be replaced eventually however I’ve spotted a company I like the look of – @lovemuju – so hope to invest in one of their reclaimed, handmade desks one day or nab another Facebook bargain. The idea for this room was to paint it all grey and then have coloured accents, which it does but clearly not as defined as your standard insta photo; realistically though that’s not really my style!

Office set up – I love our rug! (There’ll be some greenery added) 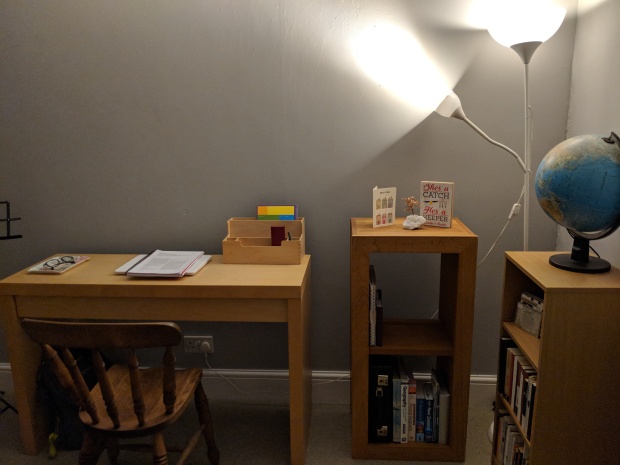 So there you have it, an introduction to the chaos that is my house renovation. There’s plenty more yet to come, I think I may have to split the kitchen into two posts as that’s a long and traumatic story! But I’m really pleased so many of you seem interested so please let me know any thoughts in the comments box below 🙂